Arnold Schwarzenegger is an impressively accessible person who very much feels like the sum of his life which combines being an athlete, businessman, actor, and politician. Friendly and charismatic, Schwarzenegger continues to pursue his passions as someone who seems to genuinely enjoy what life has brought him. As a watch and car lover, Arnold agreed that the highlights of his year are going to classic car week & the Pebble Beach Concours d’Elegance near Monterey, California, as well as Baselworld. 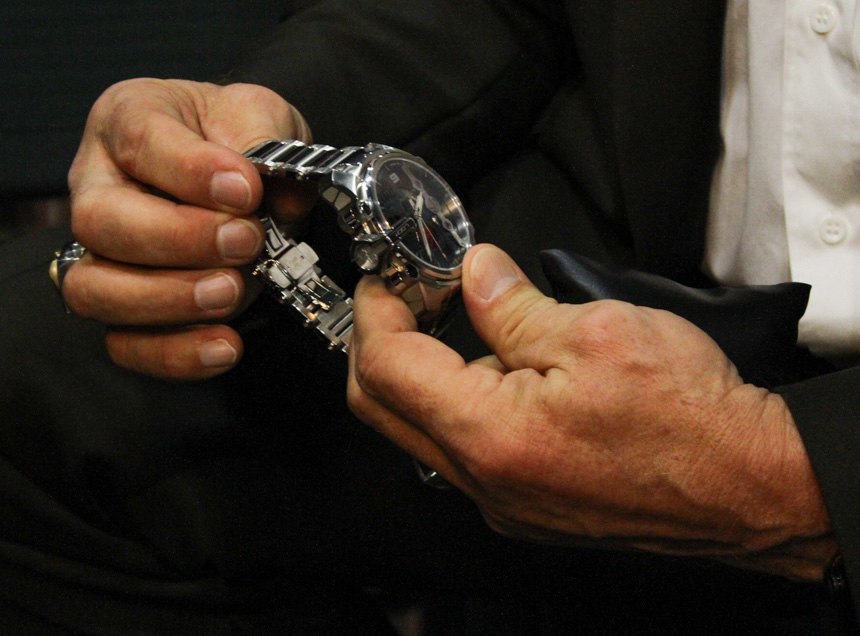 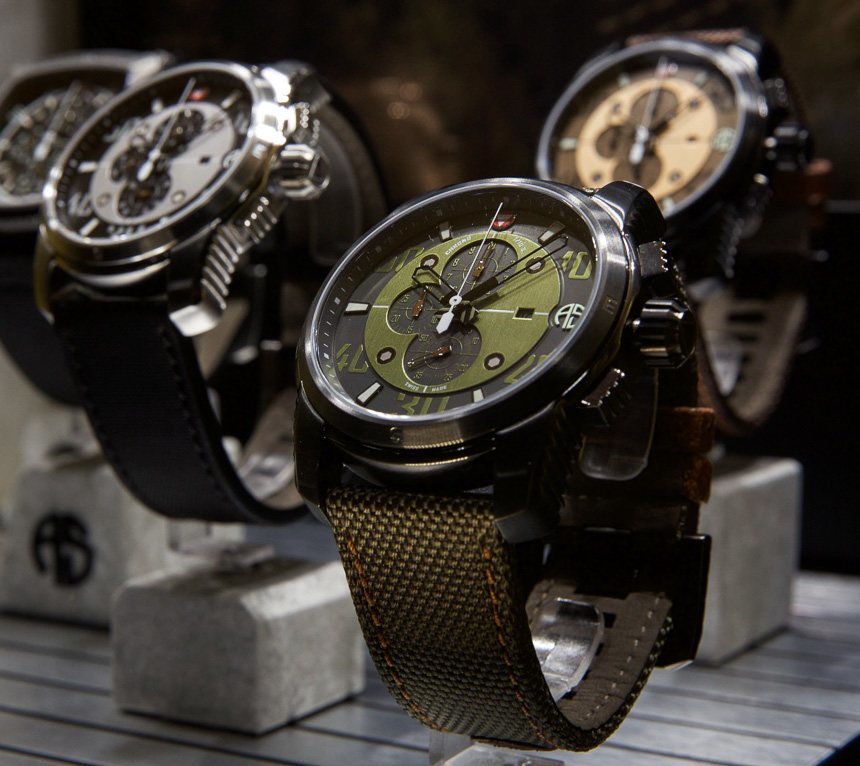 Arnold Schwarzenegger has made a brand out of the man that he has created over his lifetime of effort. Come to think of it, at least on an external level, Arnold Schwarzenegger epitomizes the definition of a “man’s man.” Arnold Schwarzenegger is an archetype of masculinity. He has been on a four decade winning streak, is a self-made made man, and whether or not his tastes fit your own, this is a person who commands respect like very few people living today.

Is it a natural step for this watch lover to become a watch designer? Schwarzenegger claims to have wanted to produce his own watches for a while now, and the Arnold Schwarzenegger watch collection for 2015 is due to a fortunate connection with what is Brazil’s largest watch producer. That’s right, Arnold Schwarzenegger is working with the Brazilian Magnum Group to produce Swiss Made watches. In turn, the Magnum Group has taken this fortunate relationship extremely seriously, bending over backwards in ways few other groups would have done in order to make Arnold’s dream a reality. You might have expected Arnold Schwarzenegger to partner with a more well-known brand among watch lovers (such as Audemars Piguet that he has worked for extensively in the past) but there are some unique benefits to working with the Magnum Group. 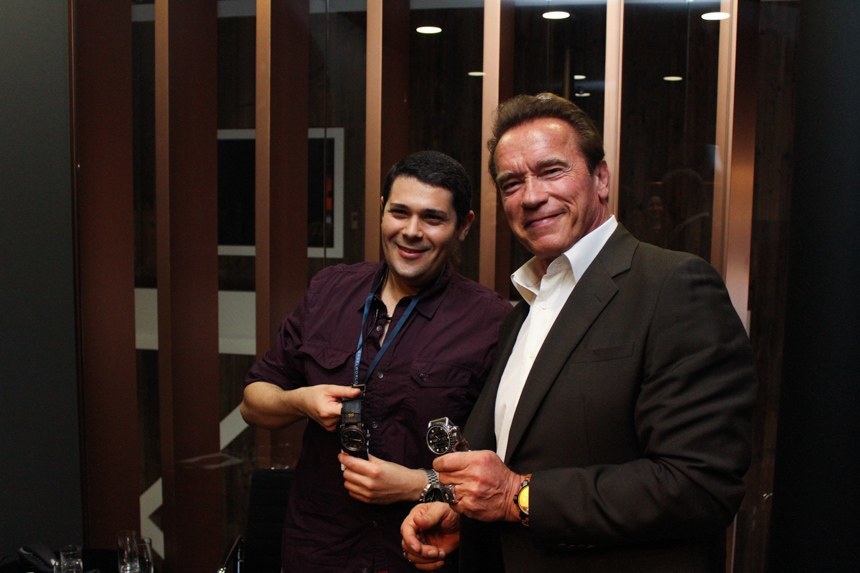 First is what I mentioned above about the team of Brazilian designers and engineers working closely under Arnold’s direction. Schwarzenegger proudly shared how their team flew to his home in Los Angeles from Brazil on a regular basis for a year and a half to work directly with him on designs and concepts. Second is the fact that with their manufacturing capacity and know how, they can produce accessibly priced timepieces as well as special high-end models with diamonds (Arnold has been known to love diamonds on some of his watches from time to time).

Think about the logic of this decision for a moment. If Arnold Schwarzenegger was to partner with a major group like the Swatch Group, Richemont, or LVMH to produce timepieces he would merely be a name associated with the venture and would be under the whim, schedule, and decisions of the group. Arnold doesn’t have the time or desire or set up his own factory, so his best bet is to work with a partner who truly wanted to materialize his vision while making it comfortable for him. As major as Arnold Schwarzenegger is, I can’t see a major Swiss company sending people to his home all the time to discuss designs as well as allow him to produce what he really wants unless it perfectly melds with their marketing plans and schedules. So the more you think about it, the more it makes perfect sense why working with a company that is not that well-known outside of Brazil was a great fit for Mr. Schwarzenegger during this watch endeavor. 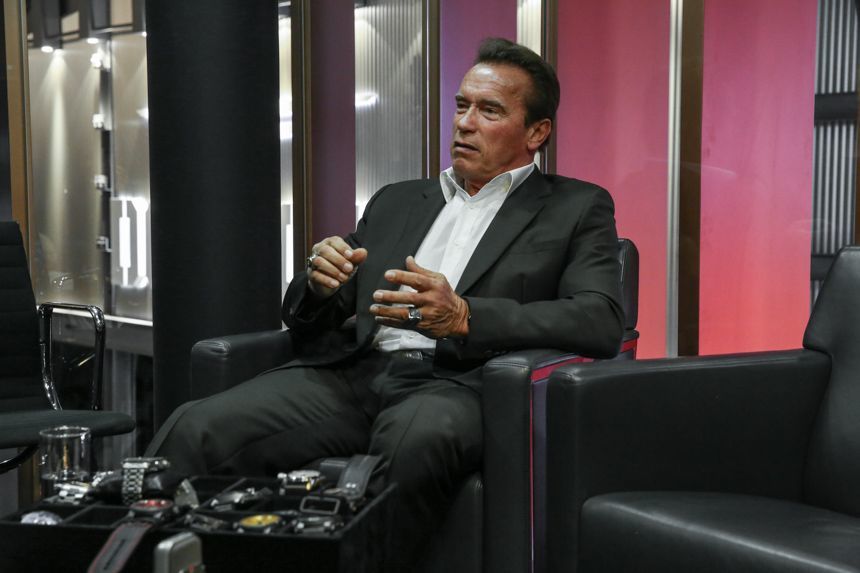 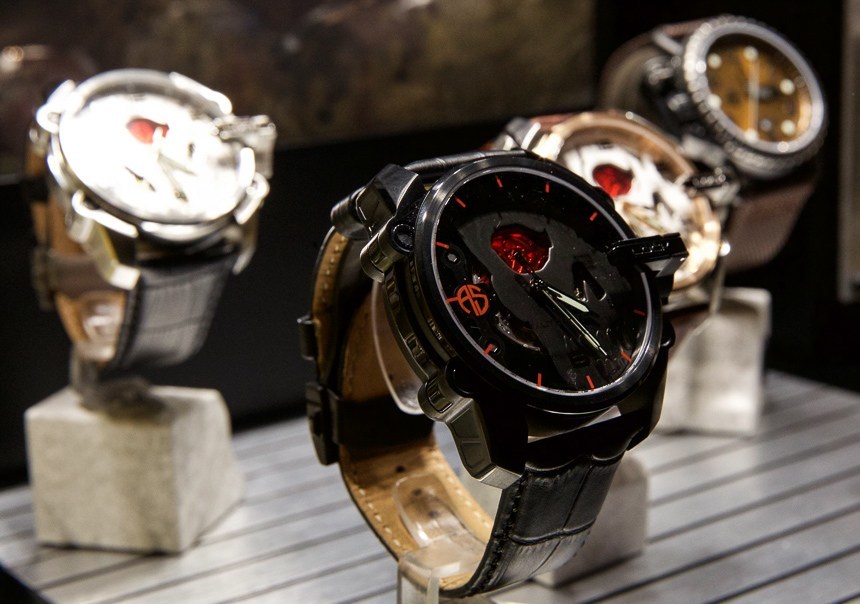 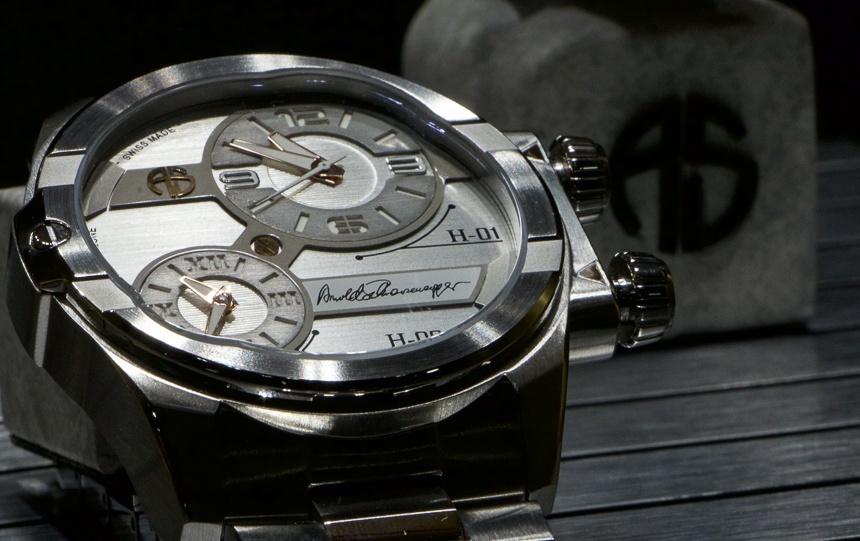 However, by nature, the Arnold Schwarzenegger watches will be massive, both in size and scope. They will be Swiss Made with sapphire crystals, and containing both quartz and mechanical movements. We are talking about someone with so many major careers, and the brand will focus on three major eras of Arnold Schwarzenegger’s life. First are his athletic bodybuilding days, next are his action hero actor days, and last is his time as a politician. Of course, some of these eras flow together, but these are the concepts behind the major product families which, according to the press materials, are: 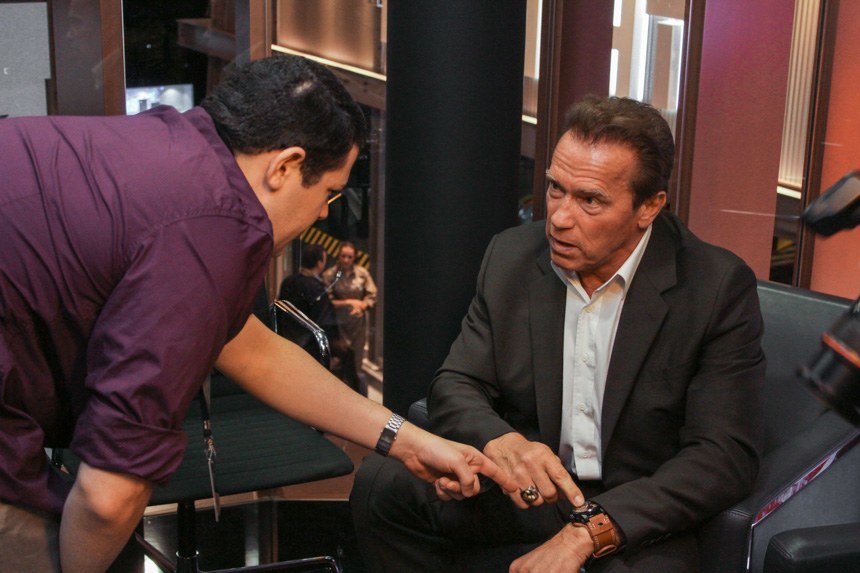 Arnold Schwarzenegger spent several minutes speaking in depth about the first collection of watches inspired by his time in the gym as a body builder. As a watch lover worth his weight in Everose gold, Arnold is keenly attuned to small details like the quality of a watch strap. Arnold recalled how amazed he was at the quality of the industrial leather used for his original weight lifting belt from the 1960s. According to him, he wanted high-quality watch straps that would look good over 40 years after being used. For Arnold, durability and longevity seem to be part of how he nerds out on timepieces and other gear (the man owns a tank), so appropriate details on his timepieces make a lot of sense.

The bodybuilding watch collection has design elements inspired by things like dumbbells and gym equipment. The rear of the case says “No Pain No Gain.” From his action hero days, you’ll see things that recall The Terminator, Predator, True Lies, and many more of the military or action movies that helped make Arnold Schwarzenegger the household name that he is today. One of the watches has part of a skull on the dial with a red eye which is clearly a nod to the T-800 android from The Terminator. Another model has a crown with a small pin that is meant to resemble a grenade pin as a testament to all the weapon-wielding characters he has played over the years. 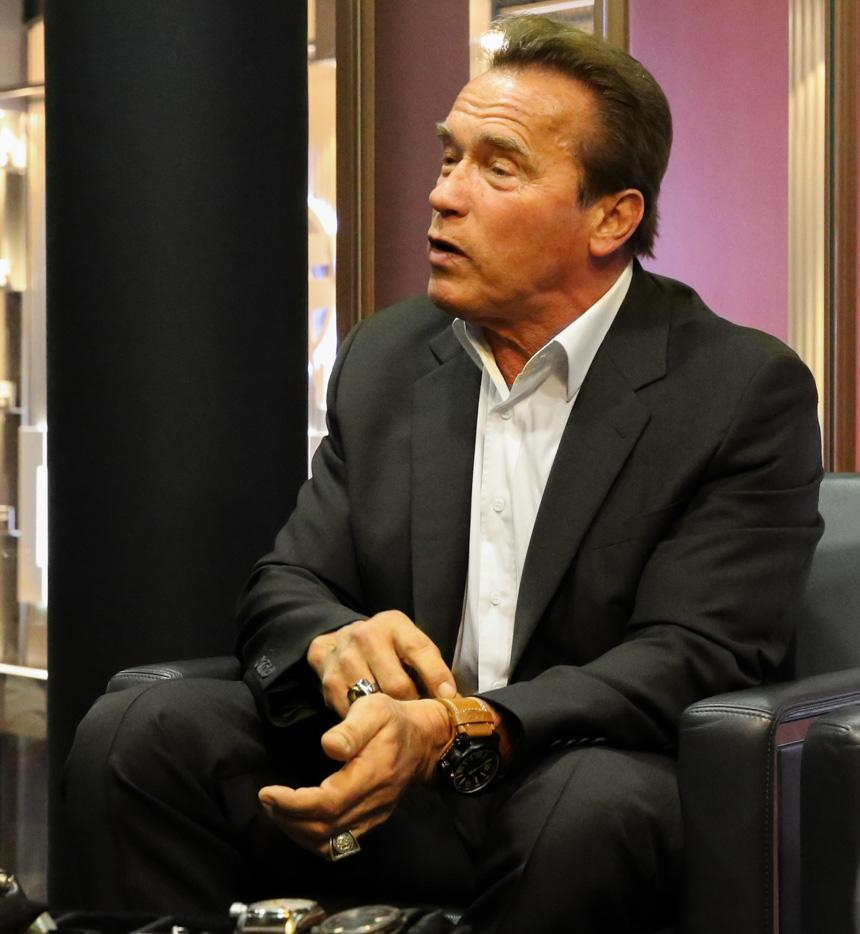 The variety of Arnold Schwarzenegger watches is sort of staggering. Sure, not all of them will make it to final production or be commercially successful, but that really isn’t the point for Mr. Schwarzenegger. You have to remember that he isn’t doing any of this for money. In fact, much of what would be his profits will go to support his longstanding and acclaimed After-School All-Stars program designed to get kids more involved in fitness. Arnold isn’t doing it for the money, Arnold is doing a watch brand because the watch lover in him really wants to.

Arnold shared with me an interesting story of how he started to really get into watches. According to him he never recalls having not been into watches, but it wasn’t until his Hollywood career that he started to become a major collector. It seems to have happened as a result of working with producers in movies to select the right watches for his characters to wear. He said that sometimes 50 or more watches would be laid out in front of him, and they would need to carefully select those watches that fit the persona he was going for in the movie. Often times that persona was a strong, masculine fighter. 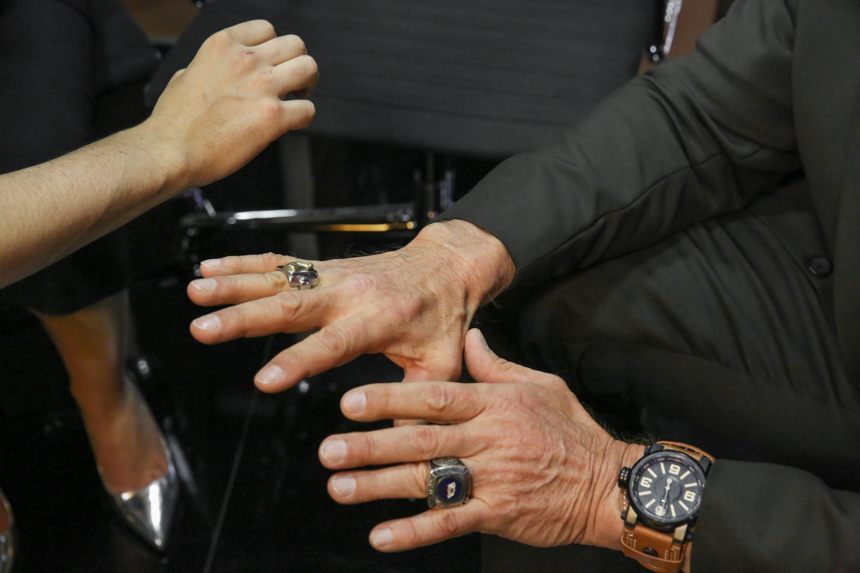 Arnold recalls that even back then, he felt disappointed with the timepiece options available to him. “I hate it when watches get lost on my wrist,” he says, when explaining his preference for larger watches. Arnold has impressively wide wrists and very large hands, so anything under 45mm wide simply looks petite on him. It isn’t that Schwarzenegger likes large watches per se, but rather that he likes timepieces which proportionally look good on him. If he were half the size, he would probably be wearing smaller timepieces.